Skip to content
You are here:Home-Reviews-Fitness-Tracker-Fitbit Ionic Review – How accurate is it in sports? (part 2)

Fitbit Ionic Review – How accurate is it in sports? (part 2) 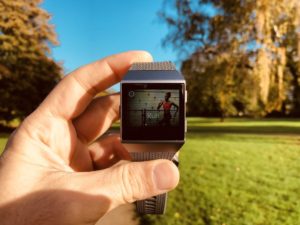 Among the sports highlights are a heart rate monitor, an altimeter and a good GPS receiver. Equipped with these and other sensors, the Ionic Workouts can record and store workouts without any additional tools, such as a smartphone. With the GPS receiver, for example, you get an accurate display of the workout distances based on distance, speed and route.

For a start we take the Fitbit Ionic with us for a run. Furthermore, the wearable is also suitable for swimming, so that we can take the device with us to the swimming pool at the next opportunity in the Fitbit Ionic review. Other pre-installed apps include cycling, treadmill, weights, interval timer and general training.

For the training we start the pre-installed running app. For the run app and the other installed apps, there are settings options available to customize the app a little bit. These include, for example, settings for automatic lap time measurement (Auto-Lap), adjusting the displayed data metrics, and the option to pause a workout automatically (auto-pause). 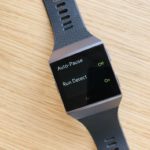 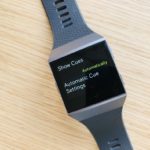 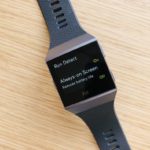 The training view of the display can be adjusted directly on the GPS watch. During the workout, 3 different data fields/rows can be displayed, which can be individualized (statistics at the top, middle and bottom). The set data for the upper and lower row are always displayed during workouts, i. e. you permanently see one and the same self-defined data field. The middle row is scrollable, either by swiping gestures or the left button, and shows different data, like distance, heart rate, time and more, see picture gallery below.

However, the Ionic cannot keep up with the data field options and adjustability of a Garmin GPS sports watch. After all, it masters all the important basic data such as duration, current and average pace, heart rate, distance or calories and much more. 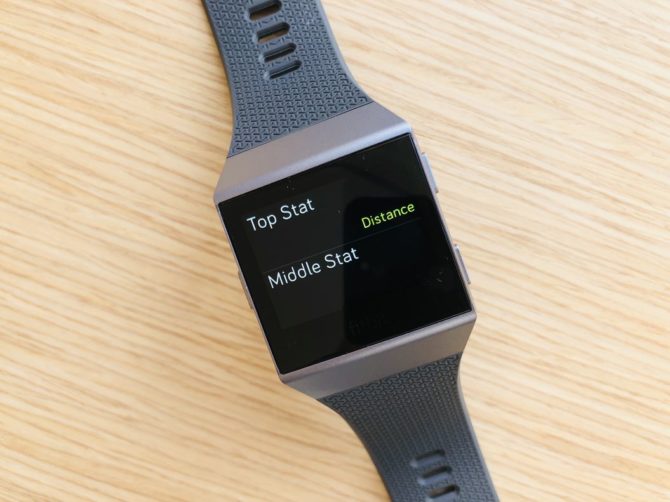 The following data fields exist for the run app: 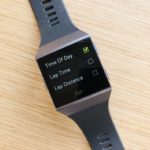 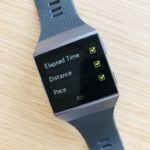 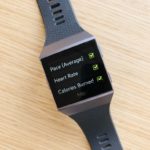 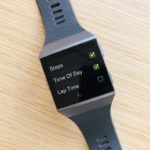 With the integrated GPS receiver we record speed, distance as well as the route covered. You should wait until the Ionic recognizes the GPS coordinates correctly and ignore the “Let’s Go! The process usually takes only a few seconds if you wait quietly at one place. Otherwise you will run without GPS and get wrong data. 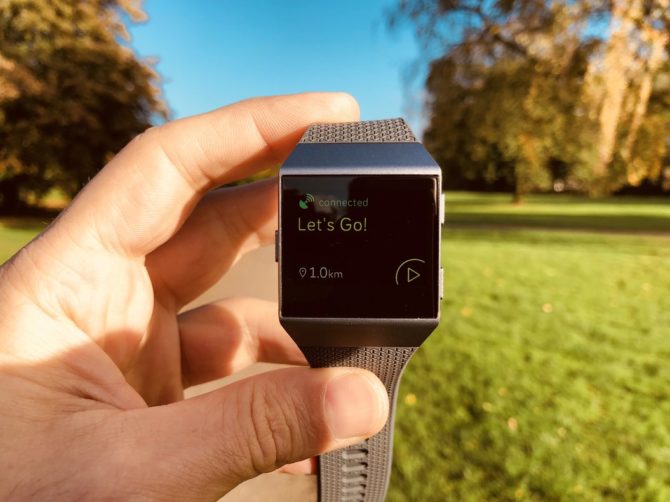 During the training you can see the above mentioned training view. To do this, you move your arm like a classic wristwatch and the otherwise switched off display is switched on. In the settings, the display can also be set to remain permanently active.

Here as an example the display for the measured heart rate: 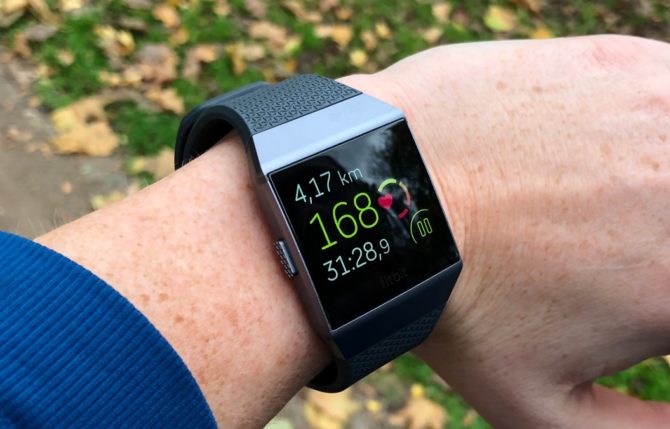 In the Fitbit Ionic review, switching on the display always worked well. The readability in bright environments is also good, because the colored display has little reflection and a large display. Except in direct sunlight, the display is hardly readable. 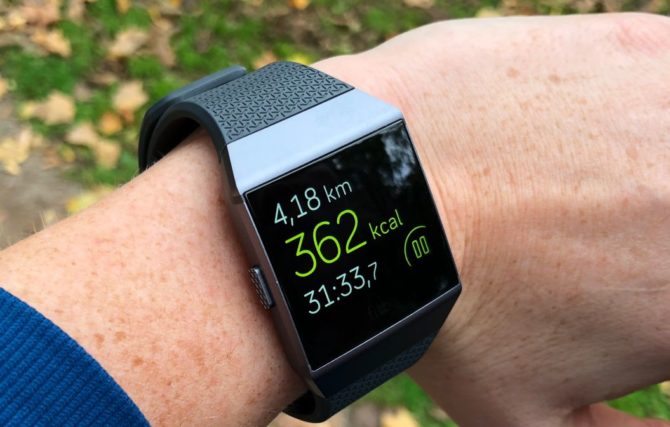 The training can be stopped and resumed at any time. When you finish your training or achieve a set goal, there is a summary: 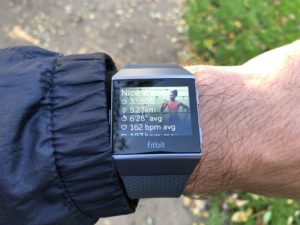 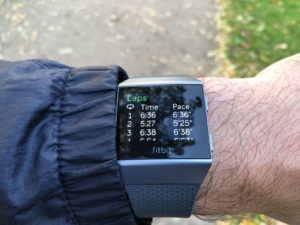 In the app and the Fitbit Fitness platform for the browser, the data are once again graphically clearly arranged (here only a small excerpt): 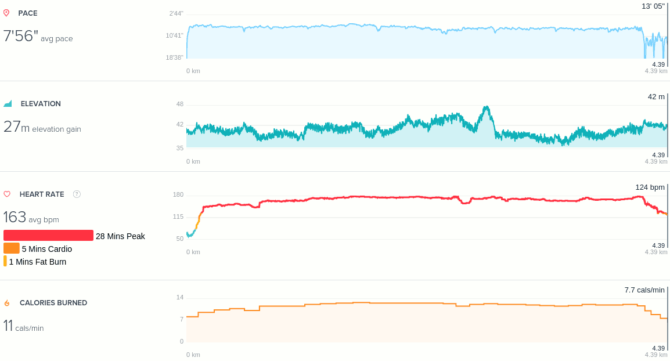 In our time with the Fitbit Ionic, the Smartwatch provided good track recordings. The measured data (such as heart rate or GPS data) can fortunately be exported in TCX format and re-imported into other tools so that it can be compared with other devices.

The first impression is that it is more accurate than the considerably more expensive multi-sport Garmin Fenix 5 GPS-Smartwatch, for example. It can’t compete with a Polar M430 running watch or an Apple Watch 3 Smartwatch, but it’s not that far away from them. We know this because we have similar track records from our reviews under similarly good weather conditions. If you want to see for yourself, just have a look at the individual reviews.

The above run unit, for example, looks like this after training: 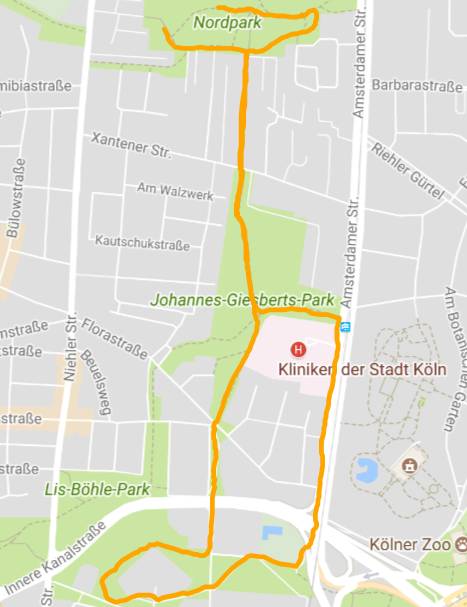 If you zoom in closer, you can see that the Fitbit Ionic has little problems with recording an exact GPS track even with bridges, in tighter curves or under trees compared to other trackers. Based on this, it can therefore provide good measurement metrics during workouts: 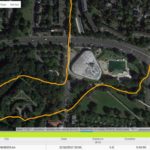 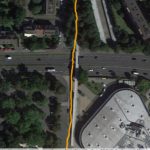 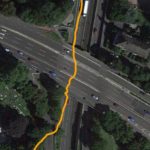 The GPS recording is quite impressive overall.

And so the Ionic:

The maximum and average values are compared below:

On the basis of the averages, it can be seen that the Fitbit Ionic delivers realistic heart rate values, at least for constant running training. Two small measuring errors can be noticed however, at about the 4th and 18th minute. Recognizable by the two swings downwards on the upper screenshot.

We will monitor this in further reviews. The fitness watch may have slipped slightly during training.

Fitbit Ionic is now available in stores. The Ionic’s EIA price is $299.95 . Ionic can also be ordered here:

The sporty side of the Fitbit Ionic is convincing so far. A final conclusion will follow as soon as we have tested even more.