Skip to content
You are here:Home-Recommendations-Fitbit Tracker: Comparison, Review & Best Fitbit To Buy

From our Fitbit tracker reviews we know numerous models for the fitness specialist. On the basis of these test reports and experiences, we have compiled the best Fitbit fitness tracker and fitness bands and thus try to support you in choosing a suitable sporting companion. Since we have already gained a lot of Fitbit experience with the trackers and watches, we know the advantages and disadvantages of the popular trackers quite well and can classify them well.

For people who are active or want to become more active, it is difficult to find a personal winner due to the large number of fitness and activity trackers. Here it helps to be clear in advance what you want to achieve personally, where and how you want to train and whatever other needs a modern fitness band, Smartwatch or a sports tracker should cover. Otherwise you run the risk of spending too much money on a device whose features you may never need.

We’ve also created a Fitbit comparison table that directly compares the Top Fitbit activity and fitness tracker and their most important features. Not everyone needs a GPS receiver in a fitness tracker, for example, because they may only train indoors, like in the gym. Saving this feature usually also means saving a lot of money.

In the section on buying a device you will find explanations about the most popular Fitbit features and how they can support you in your training. This makes it easier to choose the right Fitbit activity or fitness tracker by judging for yourself whether the feature is important to you.

We also offer an extensive selection of the best fitness trackers from various manufacturers. But if you are especially interested in a Fitbit Tracker, you have come to the right place.

Fitbit watches and trackers in comparison

To get you started, we have summarized in the following Fitbit comparison of which is the best Fitbit tracker from our point of view. 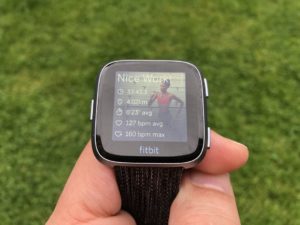 A very stylish and advanced tracker from our Fitbit reviews is the Fitbit Versa. With it you get almost everything Fitbit has to offer. Enhanced Smartwatch functions, integrated music memory, waterproofness, advanced sleep analysis functions through the use of the built-in heart rate monitor and more. It doesn’t have a built-in GPS receiver, but when you take your smartphone with you, you can use its GPS in the form of Connected GPS.

The display allows the Versa to better display messages from the smartphone compared to the smaller Fitbit trackers, as well as offering a function that allows the control of the smartphone’s music player. You can also customize the appearance of the display.

In practice, it makes a better impression on the wrist than it does on many pictures on the Internet. If the display is too big for you, take a look at Fitbit Charge 3. If you absolutely need a GPS integrated in the case, you can use the Ionic.

Alternatively, take a look at the Versa Lite Edition, which is cheaper but comes with fewer features. Smaller features like music memory, floor counter or mobile payment via NFC are missing. 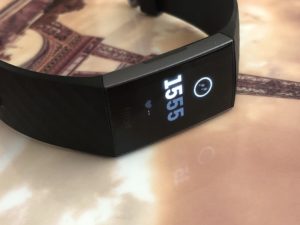 From our Fitbit tests we also recommend Charge 3. Like the Versa, Charge 3 offers the most functions that Fitbit has to offer. However, the built-in music memory is missing. A built-in GPS receiver also doesn’t have the device to offer, but if you take your smartphone with you, you can use its GPS in the form of Connected GPS.

The Fitbit Charge 3 wristband offers many of the functions of a modern fitness band and is suitable for sports enthusiasts, active people and those who want to become one. These include a 24/7 HR sensor, interchangeable wristbands and movement reminders. For runners, speed and average speed displays are available during running activities.

Fitbit brand tracker and wearables are among the world’s best known and most popular. Because Fitbit knows how to combine its chic trackers with an easy-to-use and intuitive app. Fitbit offers the devices in different price categories and for different target groups.

All Fitbit trackers have an acceleration sensor that detects accelerations or motion patterns, for example. Therefore, steps, rest periods or often the type of sport performed can be recorded automatically. The Fitbit wristbands and watches of the new generation (from 2016) have the following functions and features in common and are no longer specifically mentioned in the sections below:

One of the most important characteristics, which are different and also influence the price, are:

Fitbit’s tracker experience is not only reflected in the hardware, but also in the easy-to-use and clear Fitbit app, which is often praised by users. All Fitbit bands are compatible with the free Fitbit App. The app is undoubtedly one of the strengths of all Fitbit trackers and one of the best apps from major fitness tracker manufacturers. The app is an easy introduction to the Fitbit Tracker world, especially for newcomers, as it offers a lot of hints, explanations on recorded health data and tips on where to get better.

In addition, Fitbit’s App can use the smartphone’s GPS, for example, to record routes and display them on a map. Thus the user does not necessarily need a Fitbit Tracker with GPS and can always see where and how long he was on the road. In addition to the clear display of the recorded fitness data of the Fitbit Fitness Tracker, the app also offers additional features such as a food log, acts as a motivation companion and also allows the management of several Fitbit Trackers simultaneously. 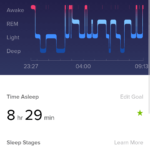 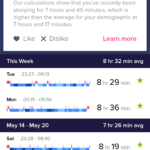 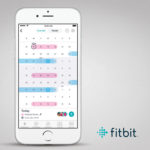 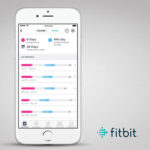 Additionally the Fitbit app is compatible with many other apps like MyFitnessPal, Strava, WeightWatchers, Endomondo and many more. The whole Fitbit compatibility list can be found here.

The Fitbit App can be installed on the following smartphone operating systems:

From our Fitbit reviews we can estimate the Fitbit HR accuracy relatively well. Fitbit bands with heart rate measurement are equipped with Fitbit PurePulse technology and can be a few beats off during intense sports activities and interval workouts where the heart rate can change rapidly.

At rest and constant activities, such as running, the Fitbit HR accuracy can be used as a good basis for estimating stress and calorie consumption. Provided the Fitbit heart rate tracker is worn correctly and the other conditions fit.

Of course the same applies as for all devices tested by gadget.fitness with optical heart rate measurement:

The devices are not medical equipment. They are designed for end users and are not intended to be scientific or medical devices. You should never rely 100% on the information provided by the tracker and first and foremost pay attention to and listen to the signs of your own body!

Fitbit helps you define and track various health and fitness goals, including workout goals, sleep goals, water goals, and more, depending on your tracker model. Below is an overview:

On Fitbit fitness trackers and bands, the standard step target is 10,000 steps per day. In order to reach the daily goal you have to take about 10,000 steps per day. Fitbit follows the recommendations of various agencies and health studies and has therefore selected 10,000 steps. Other manufacturers choose other approaches, such as a dynamic daily changing target based on the values of the previous day.

However, the 10,000 steps are not carved in stone and can be individually adapted in the app.

What are active minutes?

In order to get to active minutes, however, there are still a few boundary conditions that need to be met. Fitbit trackers calculate active minutes using METs (Metabolic Equivalent of Task) to measure energy consumption for various activities. METs also serve as an indicator of the intensity of sports activities. A MET of 1 corresponds to the body at rest. Fitbit trackers estimate the MET value by calculating the intensity and calorie consumption of an activity.

According to Fitbit, active minutes can be collected for activities from 3 METs. These are usually activities that last at least 10 minutes and are moderately intense to intense. With Fitbit Trackers that support active minutes, a corresponding target can also be set. By default, this is 30 active minutes per day.

Which Fitbit is waterproof?

Most Fitbit trackers are protected from rain, sweat and water splashes. So you shouldn’t go swimming with them. Only the Fitbit Flex 2 is water protected to a depth of 50 meters, according to the manufacturer. This probably means the water pressure at a depth of 50 meters. That should be enough for swimming.

How long does it take for Fitbit trackers to charge the battery?

In our Fitbit reviews, most Fitbit trackers took about 2 hours to recharge. Sometimes more, sometimes less. Depending on the model you get about 5-8 days new battery life.

Since its founding in 2007, Fitbit has specialized in fitness and health and has some experience in hardware and software. Further arguments for Fitbit are:

We hope you could find your personal test winner in our Fitbit comparison.

About the Author: Kate