Skip to content
You are here:Home-Reviews-Fitness-Tracker-Garmin Fenix 6 Review: A Novelty, Many Improvements

For the Garmin Fenix 6 review we have a Fenix 6 Pro sapphire. The Fenix 6 continues the Fenix series, whereby the most expensive variant brings a novelty among fitness and sports watches. It is equipped with a so-called power glass, through which the watch is charged during use and thus the already very good battery life is extended. Little by little, this Fenix 6 review and experience report reveals more and more qualities and weaknesses.

Already the Garmin Fenix 5 shines with numerous features for everyday life, outdoor, and multi-sport, but also had to take some criticism, for example, the GPS accuracy. The extensive model range also creates confusion that has to be unravelled first. Unfortunately, we didn’t spare this with the Fenix 6 either and so we also want to use this Fenix 6 Review to create a little more clarity about the available models. For you this means that you will hopefully very quickly arrive at your personal best model variant.

At the core of the Garmin Fenix 6 is an extremely powerful and everyday outdoor watch that is also suitable for triathletes. It offers numerous and customizable sports functions including heart rate monitoring, GPS/GLONASS/Galileo tracking, multi-sport modes as well as Bluetooth and ANT+ to connect almost all imaginable sports sensors. Including HR chest straps and running and wheel sensors. 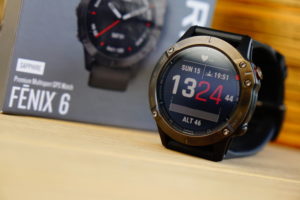 The Fenix 6 also comes with Smartwatch functions, including the possibility to make contactless payments via Garmin Pay or to play your own or streamed music via Bluetooth headphones using the music model. The transflective MIP display (memory in pixels) is not as high-resolution and the colors are not as rich as with an Apple Watch, but it is permanently switched on (Always-On Display) and outdoors and even in direct sunlight very reliable and easy to read. Here is an example: 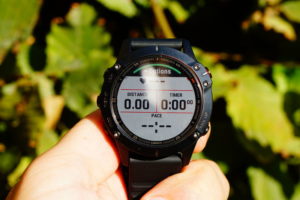 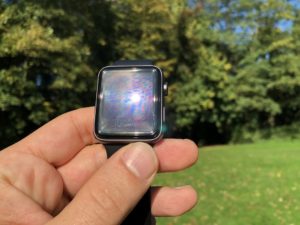 The water resistance remains up to 10ATM, making it suitable for swimming, snorkeling or high-speed water sports, but not for recreational diving.

These features are also found in its predecessors from the Fenix 5 and 5X series. So, what’s really new?

The easiest way to distinguish between the 19 models available at the beginning is to use the two new model lines. There is a base line and a pro line with some striking differences that one should be aware of. Below are more detailed descriptions of the features: 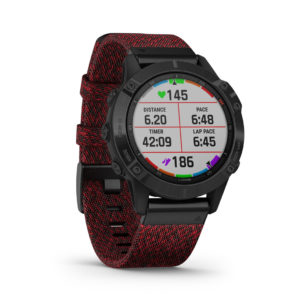 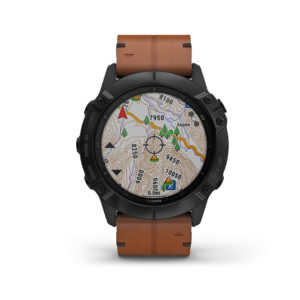 Further down in this article, we compare the main features of the different models and help you choose the one that suits you best if you are still unsure.

After we’ve brought the model variants a little closer, we take a look at the most important new features that we’ll be discussing bit by bit in the Fenix 6 review. Some of them are already visible above and also known from Garmin’s noble MARQ models as well as the Forerunner 945 running watch. At first glance, the Fenix 6 should be in no way inferior to the previously mentioned models from a feature point of view:

The Fenix 6 Pro has additional:

During our Fenix 6 review, we were the first to be curious about GPS accuracy. The predecessor didn’t always convince us. With the Fenix 6 it looks completely different now. With a total of two workouts over several kilometers on a bicycle through the city of Cologne, the Fenix 6 hardly makes a fuss. Along the way we drive along narrow roads between buildings, under trees, in parks, over bridges and so on…everything a big city has to offer. GPS+GLONASS have been set as satellite systems.

Especially between buildings GPS sports watches stumble because of signal reflections at the buildings and often do not map distances well. Below a screenshot of a part of the total distance from a distance (left) and as an example a zoom into an area between buildings (right). You can clearly see how clean the Fenix 6 Pro is even under difficult conditions: 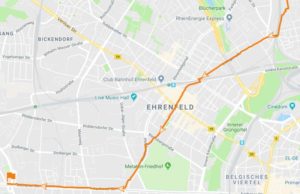 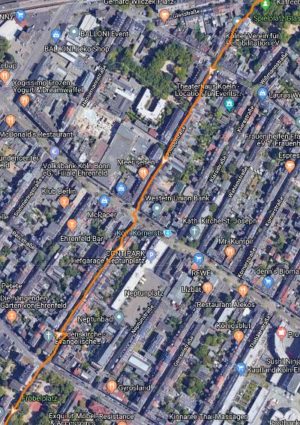 We like that all in all. From time to time, inaccuracies can be seen, but they remain within reasonable limits. For example you can see in the following screenshot. The actual distance driven is more like the red dotted line:

By the way: unplanned routes can be saved in Garmin Connect as a route and sent to a compatible device. This means that they can be easily re-scheduled in the future.

In a test of over 7 km of running, the Fenix 6 Pro shows what it can do. It allows itself only very few inaccuracies (for example at the very beginning of the training in the first meters) and convinces for the most part. A large part of the total distance looks like this: 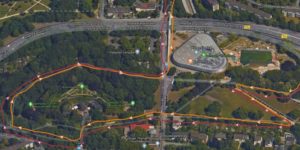 During the Fenix 6 Pro test, our Polar H10 HR chest strap was also used. This allows us to check whether the Fenix accurately measures the heart rate. The two curves over time look like the following (Garmin Fenix 6 Pro: purple, Polar H10: blue):

All in all, the Fenix 6 Pro does not have any major flaws here either. However, the occasional HR peak on the part of the Fenix 6 is seen, which does not belong there. The measurement curve reminds us a bit of that of the Vivoactive 4, which also records many peaks. These certainly influence the slightly different average values in the end result. In optical heart rate measurement, many factors can falsify the measurement. This means that HR measurements do not have to look like this for everyone. The average values look good in total:

Next we do a little interval training and want to see how the Fenix 6 reacts to the rapid changes in heart rate. Especially with interval training, optical heart rate sensors have their problems and often do not come along, which means that the HR values are only recorded very delayed. Overall, however, it looks very good at first glance, except for a few places. The Fenix 6 is particularly effective during increases in intensity and only shows delayed readings during breaks when the heart rate is slowing down.

The averages look very good. The Fenix 6 shows its best side during interval training and proves that proper training is possible without a chest strap:

One run we did with a step frequency alarm to work on a higher step frequency (Run Cadence). The Fenix 6 is set to give an alarm if the step rate falls below 164 spm (steps per minute). At the same time we take care to train with low intensity and to move between HR zones 3 and 4. The Fenix 6 is also very suitable for such scenarios.

The following screenshot shows how it is constantly corrected after the Fenix 6 issues an alarm because the step frequency has fallen below 164.

The HR measurement for a constant running unit also looks good after a short start:

From our point of view, the wide range of models and the innumerable options cause a great deal of confusion. So here is a comparison chart that compares important features of the main Garmin Fenix 6s, Fenix 6s, Fenix 6s Pro, Fenix 6 Pro and Fenix 6X Pro models:

Which Fenix 6 model to choose? Well, that’s actually quite simple: people with narrower wrists or with the desire for a flatter sports watch choose the Fenix 6S Base (42 mm) models. For all others we recommend the Fenix 6 Base (47 mm). If one of the Pro features is important to you, choose one of the Pro variants: Fenix 6S Pro or Fenix 6 Pro.

Among the Pro models you can choose between sapphire glass or Corning Gorilla Glass 3. If you can’t decide, here are some important distinguishing features:

Many Fenix 6 models are already available. We have a purchase option, item and EAN numbers, and item descriptions summarized:

These were now many facts and tables. But with this number of models it is difficult. In order to add more practical content and measurement results, we will extend this article bit by bit to a Garmin Fenix 6 practice review. The test device, a Fenix 6 Pro sapphire, has already arrived. You can see that the workmanship is still very good. Furthermore, at first glance there seems to be an improvement in GPS accuracy. The help with the first use of certain functions is also great, for example the maps: At the beginning a kind of wizzard runs on the display with the map, which informs and shows exactly which key you have to press in order to display or activate further options.

Somewhat disturbing is the buckle of our Fenix 6 Pro. This seems to be a bit sharp-edged in some places, so that sometimes there is an unpleasant feeling on the underside of the wrist. But this does not have to be the case for everyone.