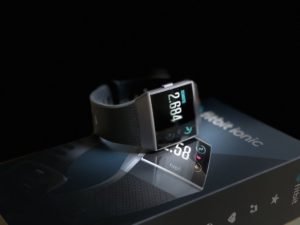 This Fitbit Ionic reviews the sporty Smartwatch. The wearable features include promising fitness features and sensors that we take a closer look at.

We will focus on the GPS and heart rate accuracy during various sports and fitness activities and provide further Fitbit Ionic experiences here.

For reviewing we bought the Ionic in smoke grey/charcoal.

Below is our summary for the Fitbit Ionic.

The Fitbit Ionic is especially suitable for fitness enthusiasts who are looking for a stylish fitness watch for everyday life and sports and want to be as independent of the smartphone as possible. With the support of various sports profiles, integrated GPS and heart rate measurement on the wrist, it is very versatile. Smart functions, a local memory for music and a good battery life round off the Ionic.

In the Fitbit Ionic review, we keep this section short and focus more on the sporting characteristics below. The Fitbit Ionic comes in an elegant dark package. In addition to the Smartwatch, the package includes a short user manual, a charging cable with USB power supply and a replacement wrist strap for narrower wrists, which fits around a wrist with a circumference of 140 to 170 mm. The larger wristband is suitable for wrists with 170 to 205 mm circumference: 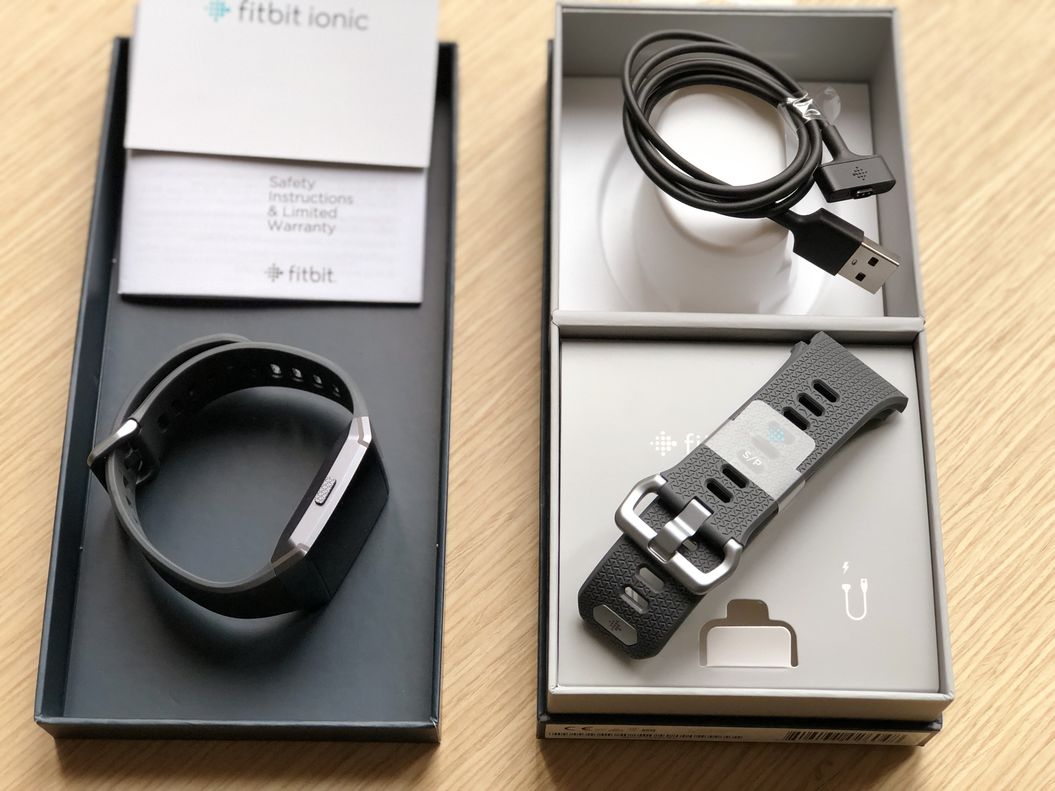 The charging cable with magnets holds the Ionic firmly in place. We have had much weaker magnets in other wearables. 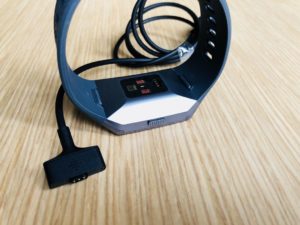 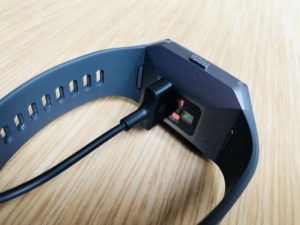 In general, the Fitbit Ionic is well processed. This applies to the unibody case and display as well as to the wristband, which is interchangeable. The manufacturer advertises strong and lightweight 6000 series aluminum in aircraft industry quality with regard to the housing frame. We have the standard version with aluminum case and silicone band here. The materials used make the wearer feel good.

The silicone band leaves a pleasant and robust impression. If you want it to be more elegant or more sporty, you can choose the version with leather band or sports band. The band is interchangeable so that the look of the GPS Smartwatch can be adapted to your own wishes.

Size, Weight, Suitability for Everyday Use

The Ionic feels light overall and is hardly noticeable when worn. She weighs only 47 grams, including the band. Compared to other Smartwatches, it is significantly flatter and lighter. Therefore, it can be worn all day long, but also while sleeping. A long-lasting battery, which lasts about 5 days depending on the use, ensures that all functions can be used for several days without having to recharge at short intervals. For example, daytime and sleep trends can be observed over several days without gaps. By way of comparison: the similar Apple Watch 3 runs about 2 to 3 days at a time, the Garmin Vivoactive 3 lasts a little longer, about 6 to 7 days.

The Fitbit Ionic leaves a futuristic impression on the wrist and is slightly larger than the Apple Watch 3 and Garmin Vivoactive 3. Their appearance is striking and usually attracts curious glances.

The Fitbit Ionic’s color LCD display, equipped with Corning Gorilla glass 3, is easy to read and comparable to the display of an Apple Watch 3. It is normally completely switched off and is only activated when the arm moves or touches the display or keypad. The behavior can also be adjusted in the settings. 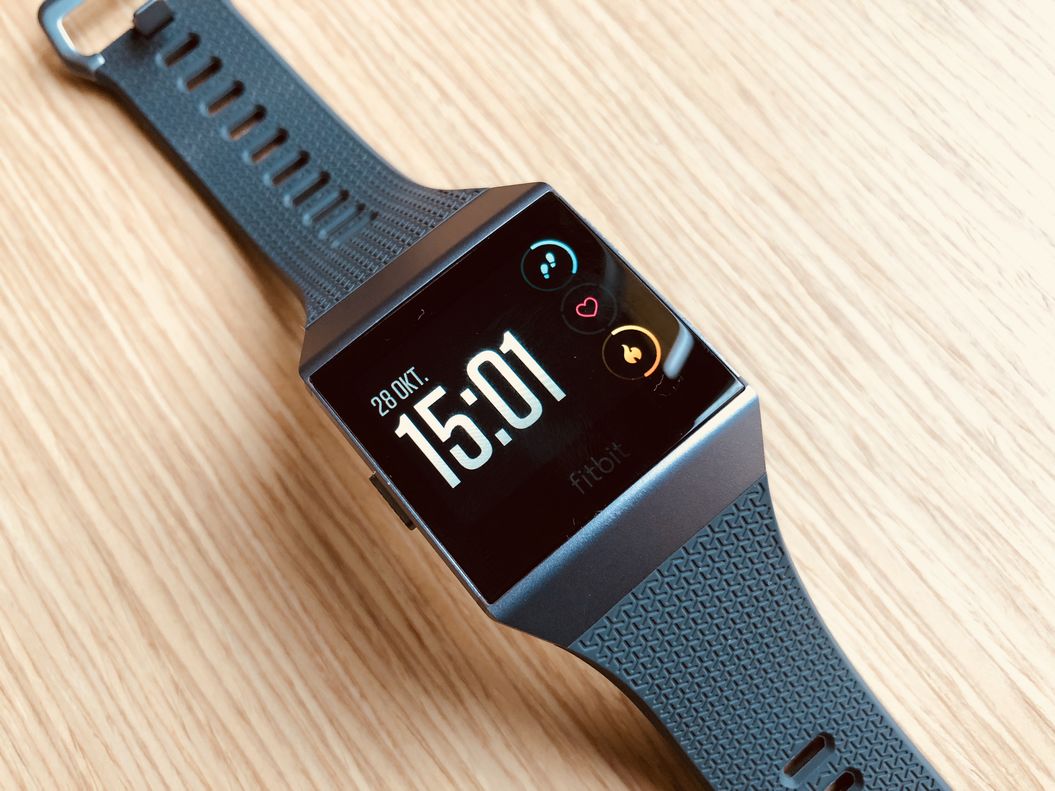 The LCD display doesn’t cope so well with direct sunlight that sometimes occurs: 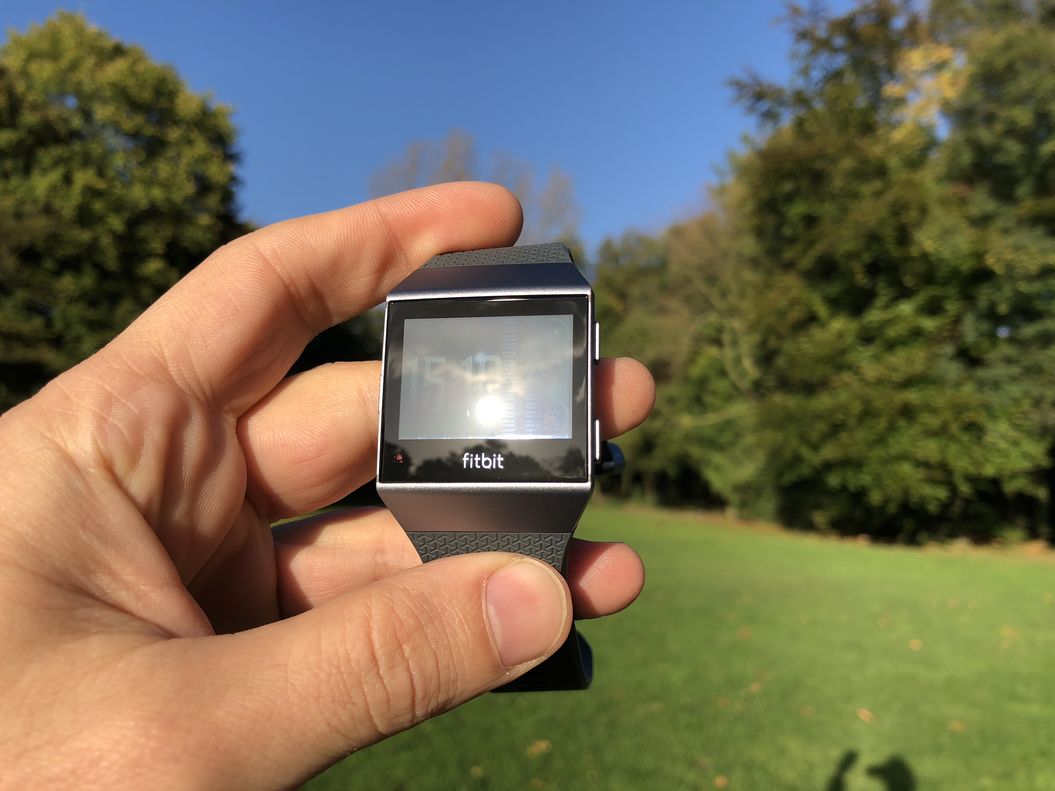 In comparison, the OLED Retina display of the 2nd generation of Apple Watch 3 in direct sunlight, which is similarly less readable: 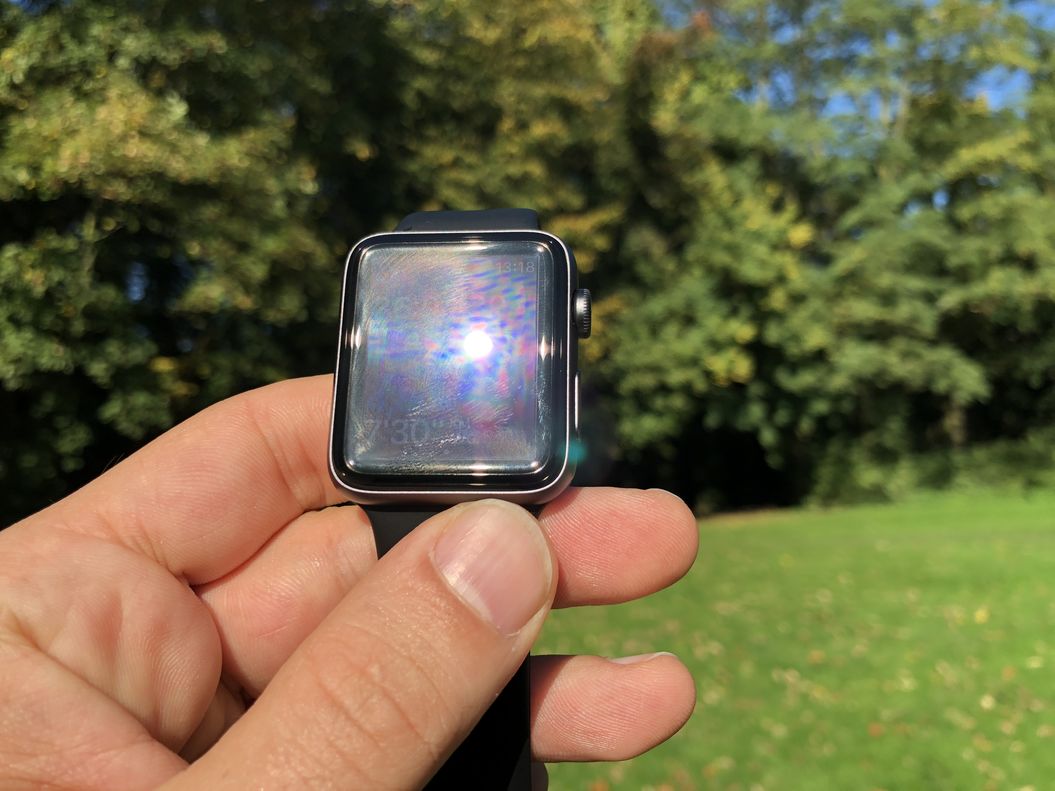 In addition, the comparison with the transflective MIP display (memory in pixels) of a Garmin Vivoactive 3, which has no problems: 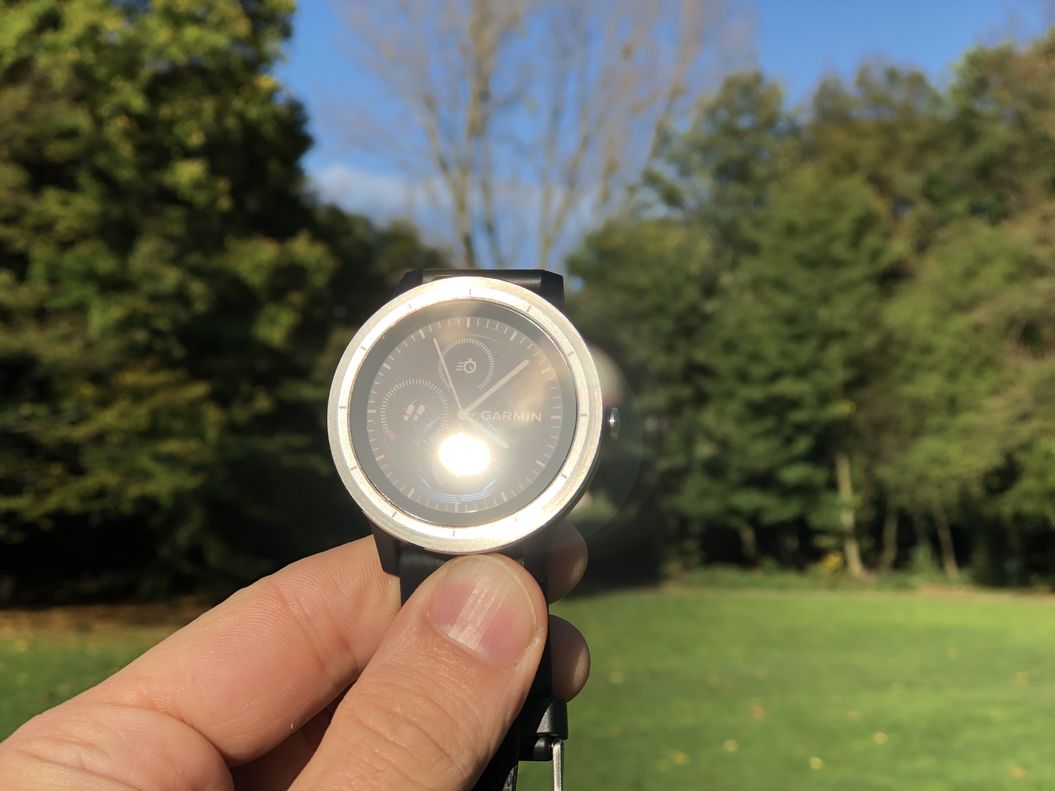 The Fitbit Ionic’s menu navigation and control is provided by touch and swipe gestures on the display as well as a total of three lateral buttons. You type or swipe on the display to access various statistics or menus. For example, swiping down from the top of the screen, you will get to the music player display, which plays music via paired Bluetooth headphones. A swipe from bottom to top at the bottom of the screen indicates received smartphone messages.

It’s a good thing that the Ionic has keys that are suitable for sports and that you can reach options not only via the touch display. They allow you to operate the fitness watch during a workout, even if you have sweaty or wet fingers (or wear gloves) and therefore the display is not so easy to operate. For example, for starting, pausing, and ending a course. For example, the Apple Watch always needs to be swiped on the display to stop or pause a workout.

A swipe from right to left shows further options of the Ionic: 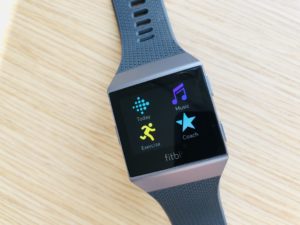 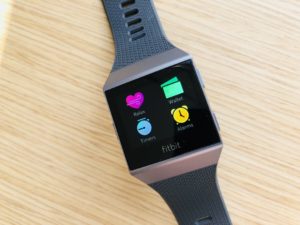 Fitness fans will be eagerly awaited and will quickly press the sports button at the bottom right hand corner of the app. Here are some examples: 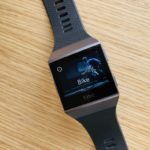 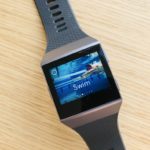 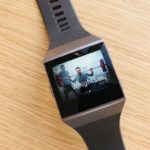 The high-tech Smartwatch is packed with new technology, much more than any other Fitbit Tracker. It combines all the features Fitbit has built into a tracker, but adds new technology to its case. All these innovations mean that the smartphone can stay completely at home during the sport. This applies to music lovers as well as GPS fans.

Among other things, it contains the following new or improved sensors and features:

Fitbit has come up with something special about the GPS antenna. It is in the framework itself and should therefore provide a better satellite connection. The following pages in our Fitbit Ionic Review show how accurate the GPS as well as the heart rate monitor recording are. According to Fitbit’s own data, it is the best GPS and GLONASS tracking in the industry.

Of course, it also automatically records steps, calories, levels, sleep phases, moments of rest and much more. In addition, it has numerous intelligent Smartwatch features such as smartphone notifications and the possibility to personalize your own device.

App developers is able to access the Fitbit App Software Development Kit (SDK) since September 2017, so that almost every app can be integrated into the Fitbit Ionic.

Fitbit benefits from the Pebble purchase and now offers a new operating system for its trackers with Fitbit OS, which is to be updated regularly and bring new features. This includes the Fitbit App Gallery, which allows Ionic users to select their apps and dials so that they always get the information they need.

The App Gallery is supposed to offer health and fitness apps from Fitbit, such as Exercise, Fitbit Coach, Relax, Timer and many more, as well as popular, not mentioned apps. Each app is specifically designed for Ionic, so there’s no need to download accompanying mobile apps or be around smartphones.

The following partner apps will be available on Ionic from the start:

According to the manufacturer, the Ionic is supposed to attack the Apple Watch series and gain market share. However, due to the many similarities, we believe that Ionic will presumably compete more with the current Vivoactive HR and its successor Vivoactive 3. The Vivoactive 3 is available in stores. The Polar M430 is also available in the price range of the Ionic and Vivoactive models, and although it is equipped with a very good GPS receiver, it is aimed more at runners and scores less on smartphone notifications.

Fitbit Ionic is now available in stores. The Ionic’s EIA price is $299.95 . Ionic can also be ordered here:

Our extensive Fitbit Ionic review is in full swing and has more to offer, but first convincing results from our workouts are already available.

Continue reading on the next page: Fitbit Ionic during sports: How does the Ionic Heart Rate Sensor compare to a HR Chest Strap? How exactly does it measure the heart rate  and how good is the GPS receiver? This and much more in the second sportier part….