Skip to content
You are here:Home-Reviews-Fitness-Tracker-Polar A360 – In-depth Review

In this Polar A360 review we will examine the versatile activity tracker which also marks Polar’s debut into the optical pulse measurement territory. The feature list of the A360 includes an integrated heart rate monitor for sport activities, smart coaching and smart watch functions and features a color touch screen. Now let’s take a closer look at the A360…

The Polar A360 is suitable for amateur athletes and people who want to maintain a more active lifestyle, and during workouts like to record data such as pace and calories. In addition, it brings useful features such as smartphone alerts and a good battery life. For those interested in 24/7 pulse recording, take a look at Garmin Vivosmart HR or Fitbit Charge 2.

It is available in several colors and sizes, Charcoal black (sizes M and L) and Powder White (size S). The A360’s design is chic and high quality, and is rather light, coming in at 31.7 grams (S), 33.7 grams (M) and 37.3 grams (L). The black strap can be worn inconspicuously. For fashion conscious people, one of the other color variants is probably more interesting. It is made of soft silicone, giving it a sense of comfort and a nice feel to it.

The packaging includes a standard Micro USB charging cable. It can be used to charge the A360 or to synchronize it with Polar Flow. 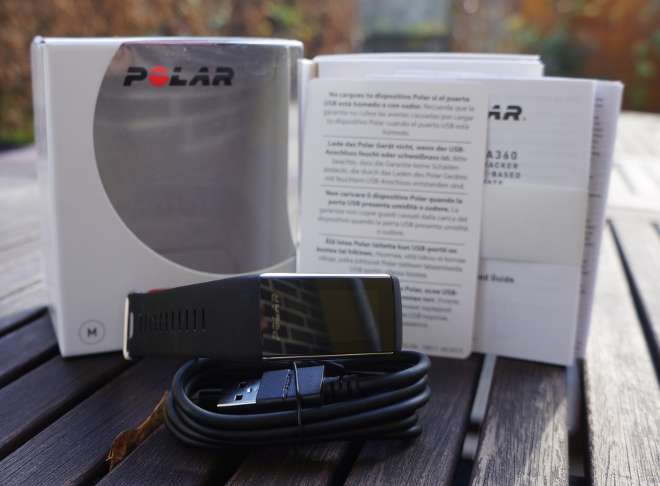 The Polar A360 consists of two parts, the wristband itself and the activity tracker and heart rate monitor unit. The strap can be changed easily, accessory straps have been available from Polar as of January 2016.

Unfortunately, access to the USB interface can be a bit cumbersome. Due to the fact that it is protected against water penetration, the cover Polar has developed is a bit fiddly. 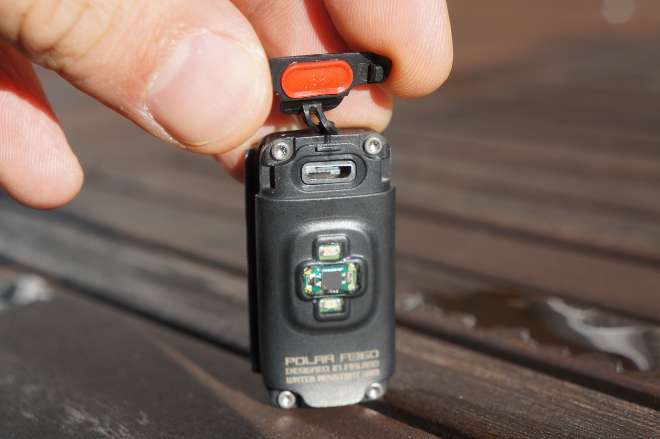 This printable template can help you determine the lengths of the strap that suits you.

The stainless steel lock makes sure the wristband is firmly and securely applied to the wrist. 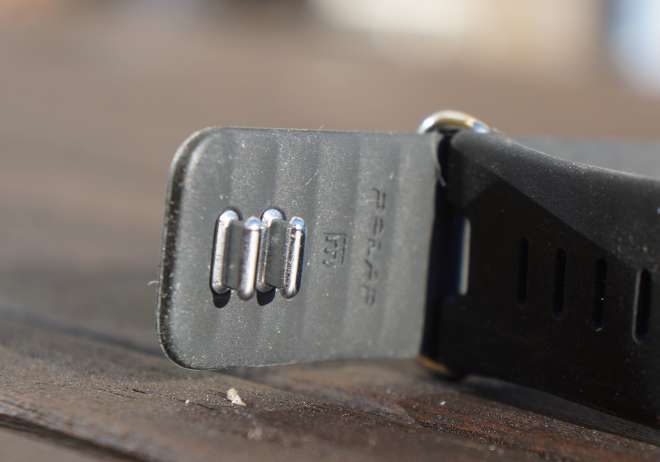 The initial setup and synchronization of the Polar A360 can be done by Flow Sync on your PC (Windows XP or later) or Mac (OS X 10.6 or higher) or via Bluetooth Smart with the Flow smartphone app (Android 4.3/ iOS7 or higher). If you already have a Flow account, established data will be taken.

Synchronization type data can always be carried out on the go wirelessly. The synchronization with the Polar Flow App can take some time. For comparison, devices from other manufacturers synchronize faster.

The A360 has a control key on the side, which can serve as a rewind and synchronization button. In addition, the color screen supports typing and swiping to scroll through the simple menu structure. The operation is very good and works well even when the screen is wet.

The color display is great as well, it is still visible even from high brightness and direct sunlight. The display can be turned on by a simple flick of the wrist or just simply by pressing the side button. 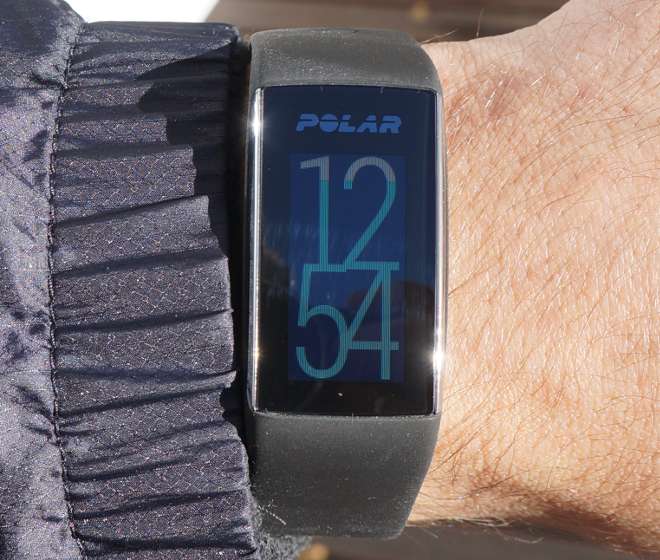 It sports a decently perceptible vibration alarm that can report various status messages such as messages or calls from your smartphone (currently available for iOS and Android). By using the alarm function, the vibrations can also wake up the user.

The A360 has two operation modes, which are detailed below:


The Polar A360 tracks activities with the internal 3D acceleratometer which detects movements of the wrist. It takes into account the user inputs analyzing frequency, intensity, and regularity of the wrist movements. This activity tracker can therefore derive how active the user is in everyday life. Among other things, the Polar A360 detects steps, calories, distance, and sleep patterns. 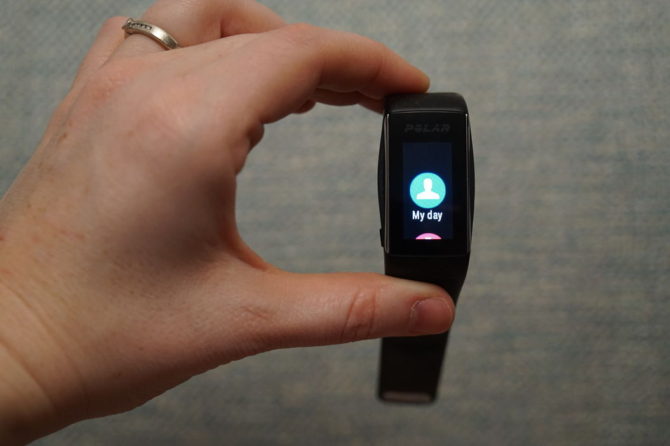 
Regarding the accuracy of steps or calories burned with activity trackers in general: Whoever is experienced with this topic understands that there is no such thing as a perfect tracker, regardless of the manufacturer. For example, the arm movements of brushing your teeth may be interpreted as steps. If one rides a bike, it is not as accurate since the arm and body motions are absent. The important aspect of a fitness tracker is to motivate, and it works best with daily goals. For example, you set a goal of 10,000 steps, the recommended amount daily. After reaching this goal, you will know if you have moved sufficient or not.

By tapping “my day” on the display, the daily activity target progress, including the steps, distance, and calorie consumption for the day can be seen in detail in Polar Flow App.

This display is in a kind of timeline of events organized chronologically. If you tap on it, further details can be read. To see what you still have left to accomplish the daily activity, you tap activity data. It gives tips and hints which activities you can do to reach the goal (for example, 50 minutes of running.) 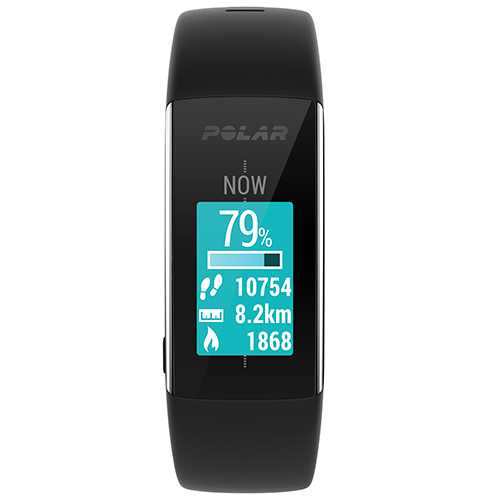 Tip: The Polar A360 should be worn on the non dominant hand to recieve the most accurate activity tracking results.

The capturable data in normal mode without pulse measurement includes:

The progress of the daily activity objective is also displayed on the time display, in which the numbers are more filled with color the more you approach your target.

It is commendable that the Polar A360 takes into account the selected level and intensity of the activities to indicate how long you have to be active throughout the day to reach the daily activity target. This gives useful advice on the wristband itself (for example, 20 minutes of running) or in the Flow app. The A360 follows the daily activity in 5 levels of intensity: resting, sitting, low, medium, high. The higher the intensity, the faster you reach your goal.

The Polar A360 recognizes when you were inactive for too long during the day, for example due to long seating periods. After approximately 55 minutes of sitting, the A30 reports an inactivity alarm, a reminder to get up and be active in order to stimulate blood circulation, metabolism, and basal energy rate.

To avoid an inactivity stamp, you should for example, take a short walk, perform stretches, or other light activity. Inactivity stamps appear in the Flow app and Flow web service. From there you can see if you have been inactive too often so that you can correct this behavior with health-promoting activities.

A360 as a Sleep Tracker and Alarm Clock

What most current fitness bracelests can do now, including the A360, is automatic sleep tracking. In our A360 test, the device did not disappoint and reliably detected sleep cycles of the user. When using the alarm function, the fitness wristband vibrates to wake up the user. Here Polar has come up with something special: First, it vibrates in short pulses, eventually getting stronger and lasting longer in vibration sequences.  If you do not want to get up, the snooze function (10 minutes) can be used.

During the sleep phase the A360 differentiates between relaxed sleep (quiet sleep, lack of movement) and restless sleep (more movement and position changes) based on wrist movements. This is called sleep quality. Interruptions of more than one hour stop the acquisition of sleep time. In addition to the quiality of sleep, sleep time is also determined and displayed after syncing on the Polar Flow website and in the Flow app.

Using the sleep tracker feature of the A360 and the contrast between restful and restless sleep, conclusions can be drawn about the personal sleep patterns (time and duration) as well as possible impacts resulting from the sleep quality in everyday life. These findings can help if necessary and lead you to finding ways to sleep better and feel more rested during the daytime.

Unfortunately, the A360 and the flow app’s true strength isn’t in the sleep tracker as much as in the daily target achievment, as you’re on your own with the raw data and would likely need to do something about sleep quality and improve your sleeping environment and nightly routines. For example you can also be careful about having heavy meals before going to sleep, if you had a busy and stressful day, or pay attention to temperature and darkness of the sleeping environment, which are major factors on your sleep quality as well.

Polar A360: Training with the Heart Rate Monitor

Once you activate the training mode, the built in heart rate monitor turns on. While selecting the sport from the list of activities, the A360 is already looking for a pulse. In Flow a lot of predefined sport profiles are available, which can be loaded onto the A360.

We measured the time it took the display to show the pulse as around 12 seconds. A good value but it can vary depending on skin color and surroundings. For darker skin types, having tattoos on the skin, cold skin, etc, it can take even longer.

A tap on the sport profile widget activates the training mode and recording of the pulse and movement data. Thus recorded activities are automatically marked as workouts in Polar Flow and entered in the training diary including all additional information, such as heart rate in beats per minute, Maximum HR, Average HR and an HR diagram.

We had the A360 subjected to an underwater test due to the fact that pulse monitors usually do not work well by most fitness trackers with integrated pulse sensors. The Polar A360 surprised here, because the pulse measurement seems to work well under water. However it can be in this case difficult to monitor how accurate the readings are.

To interrupt an exercise recording, press the side button and the A360 goes into pause mode. To continue the recording of the training, tap on the double green arrow icon. To stop recording a training session, hold the side button during recording or paused until the summary appears. Or hold the red stop icon for three seconds to end the session.

After syncing, the data is available on Flow. Afterwards in the app, for example, in the training daybook, you can assign a different sport art to the activity from a quite long sport profile list. There are also helpful tips for the training benefit.

Very nice to see are the breaks during the lane swimming and the increase of the training intensity during the swimming exercises. But also minor misfires. Overall it can be said that the Polar A360 pulse monitor performs better when swimming compared to comparable devices. However it should be noted that the A360 was not designed for swimming and is therefore unlikely to be accurate and present reliable data. Too many parameters such as water penetration and cool skin can affect the results.

If you recieve a notification, the Polar A360 informs you by vibrating and the display shows:

The Polar A360 shows the possibilites of a well equipped fitness wristband. The A360 has the goal for the user to live a more active lifestyle by assisting them and motivating them to do physical activities of different intensities and to avoid prolonged sitting. The fitness band is rounded off by smart notifications and the sleep tracker function. The manufacturer could make improvements to the Polar Flow app. Even more support and assistance in the analysis and termination of poor sleep behavior would be desirable.