Skip to content
You are here:Home-Reviews-Smart Body Scale-Review of Fitbit Aria – Smart scale with WLAN

In this Fitbit Aria review, we will focus on the smart health scales and their characteristics. The Aria is Fitbit’s first scale with WLAN and enables automated synchronization with the Fitbit App, which is also used for Fitbit’s trackers.

The Fitbit Aria is prepared for the review: 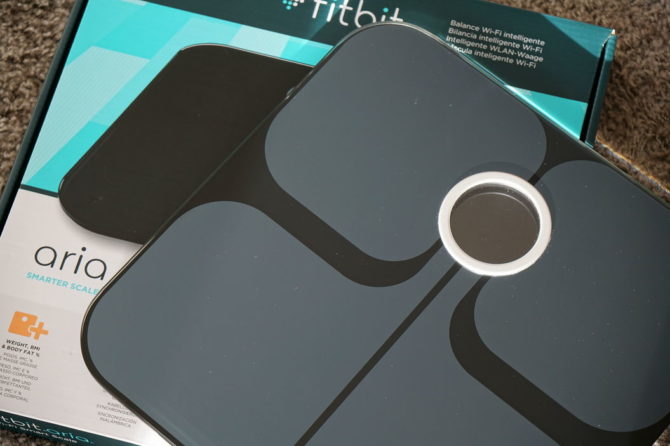 In addition to the Aria 4 WLAN scales, the package includes AA batteries already in use and an Aria quick reference guide. 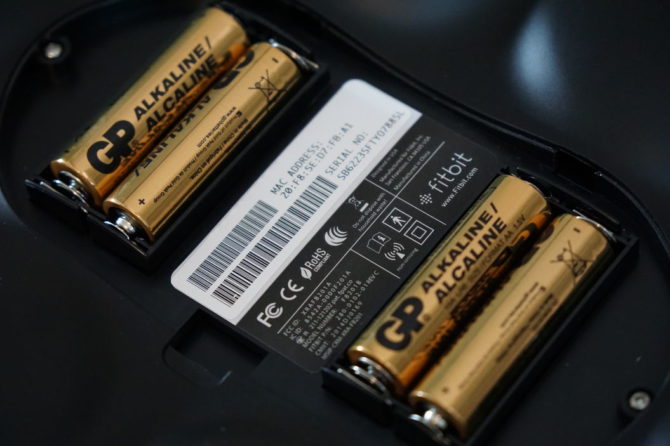 The Quick Start Guide is typical for smart devices, i.e. it is extremely concise. It is understandable, because the devices can be expanded on or improved by the manufacturer with new functions at any time, so that it only makes sense to keep an extensible manual online. The manual on the manufacturer’s website is available in English, comprehensive and easy to understand.

At 33.4 mm, the Aria is a very flat scale. It weighs 1.93 kg itself and measures people from about 10 and up to 159 kg. The surface consists of a high-gloss hard glass surface and is therefore easy to clean. However, there is a risk of slipping if the surface is wet. 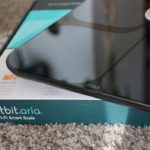 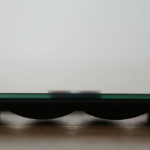 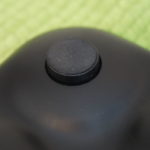 The LCD display is always easy to read. It displays weight, body fat % and a possible user selection. The units can be set in pounds, kilograms or stones.

The Fitbit Aria is an intelligent scale that measures body weight as well as BMI, lean mass and body fat content and then automatically uploads this data to an online user account via WLAN. The body fat percentage is estimated by bioelectric impedance analysis (BIA).

Important note: The Fitbit Aria should not be used:

The scale is also not suitable for children under the age of ten or for diagnosing or treating health problems or diseases. In case of doubt, consult a doctor.

Using the Fitbit app, the data can then be tracked over a long period of time as a table or graph, with the app helping to achieve individually defined goals and providing helpful tips.

If you have never used a smart scale before, the installation of such a scale seems a bit strange, because the Fitbit Aria has to be integrated into the local WLAN network. This enables the balance to automatically upload the measured data into the online account so that the app can access and edit the data.

To set up a Fitbit account is required, which is best created before you start using it, if you don’t have one. You should also have the initial setup instructions at hand, because they contain important hints without which the installation could be a bit bumpy if you have no experience with smart scales. You can then use a MAC (Mac OS X 10.5 or later) or PC (Windows XP and later) with WLAN card and the Fitbit Wi-Fi Scale Setup Tool or a smartphone (Android, iPhone, Windows Phone) with Fitbit App installed to set up the scale.

How the Smart Scale Works

The Fitbit Aria uses four load cells to measure weight. Body fat is calculated on the basis of weight and personal data in the user account. A bio-impedance analysis is used. This is made possible by indium tin oxide electrodes (ITO electrodes) on the surface of the balance, which send a weak, harmless signal (note the above) through the body to measure the impedance.

The Fitbit Aria is ready for use after being connected to the local network. It then measures weight and body fat percentage and automatically synchronizes the data with the linked Fitbit account. Aria automatically recognises up to eight different people, with each user requiring a Fitbit account. This means that every user can decide for themselves who sees which data and which data he wants to share. If a person who does not have an account associated with the scales is measured on the Aria, only their weight and not their body fat percentage is displayed.

It will be difficult for the Aria to identify people when they are of similar weight (+/- 4 kg.) As a solution, the Aria scales prompts the current user to identify themselves by their initials in order to assign the measured values to the correct account.

It is easy to use: simply place it on the scale and wait a few seconds until the Fitbit Aria has taken the measurements in a few seconds. The weight is displayed first: 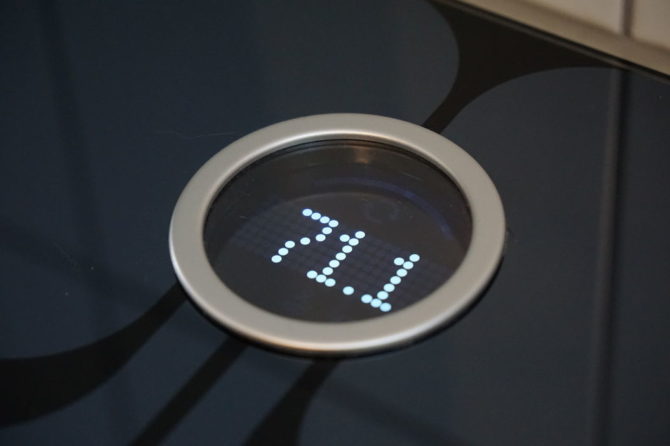 And then the body fat percentage: 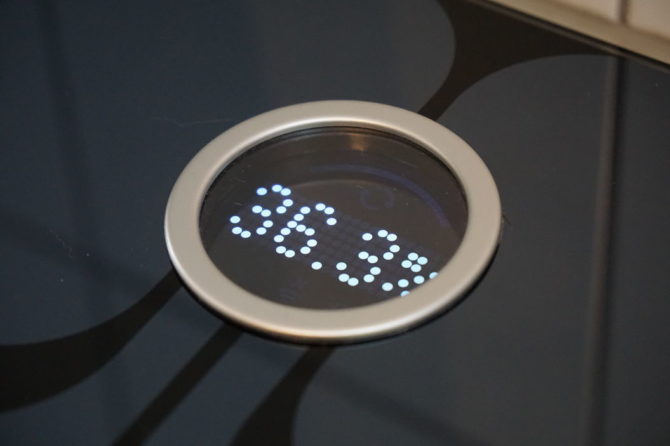 Finally, Fitbit Aria displays the end of the measurement and starts synchronizing with the automatically detected Fitbit account: 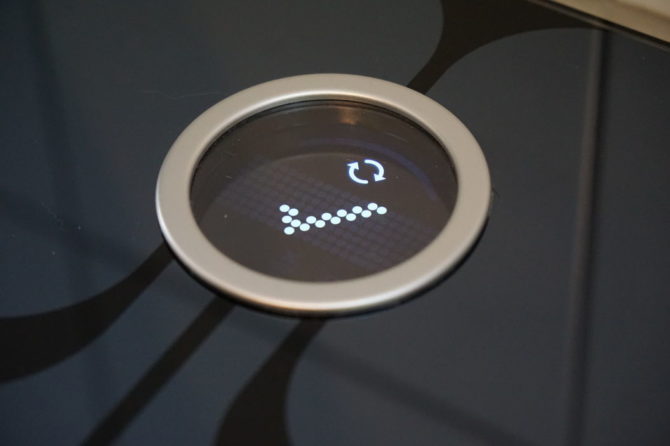 The data can then be viewed immediately in the dashboard of the app or in the browser. Of course, this is only really fun if you have set goals in the app and already weighed yourself a few times.

The real highlight of a smart scale is the app that tracks trends and helps you achieve your goals. The easy to use and clear Fitbit app is well known from our numerous Fitbit reviews.

Among the possible goals available are losing weight, gaining weight and keeping weight. You can also work towards a target for your body fat percentage. 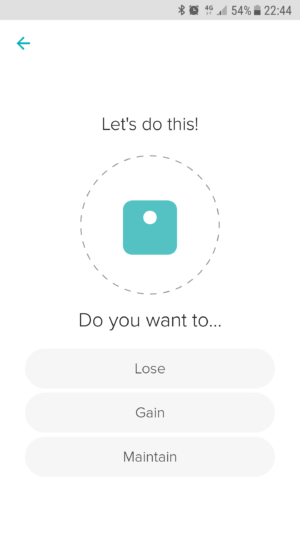 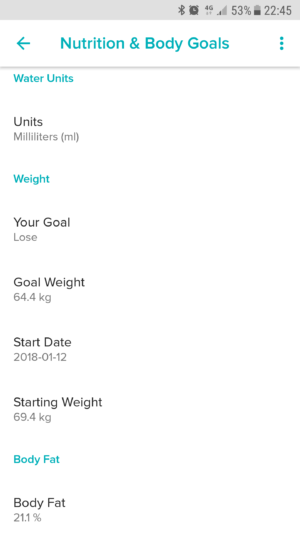 Long-term trends are important and these are clearly presented by the app in the form of tables and diagrams. And this is how it looks like after a few weeks of Fitbit Aria reviewing for the target weight holding: 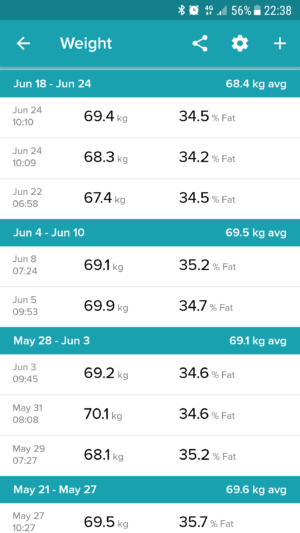 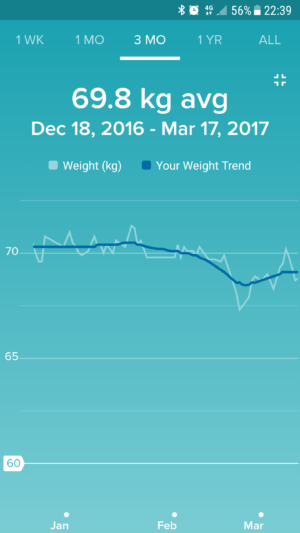 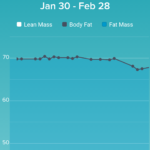 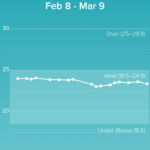 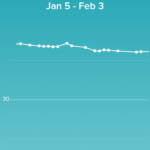 If you also have a Fitbit Tracker, the app provides even more data (sports activities, heart rate, sleep and more): 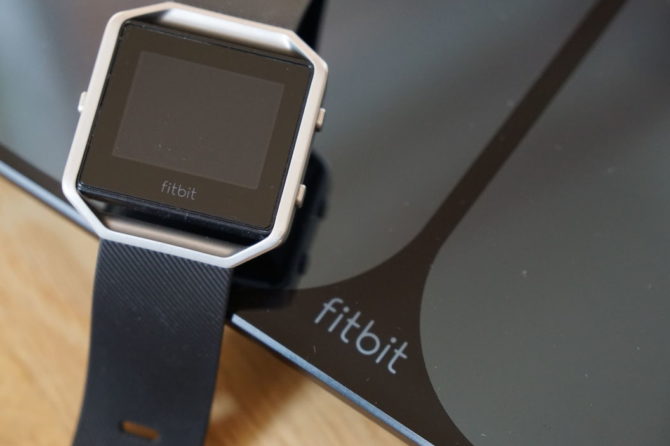 The Fitbit Aria are already available in stores, for example, here:

In this Fitbit Aria review, the smart health scales performed their main tasks reliably after the initial setup. With thanks to WLAN. The strengths of the Aria are comfort, a good app and good looks. The Fitbit Aria is especially suitable for people who want to keep an eye on their weight, BMI and body fat automatically and who want to identify trends and progress as well as pursue goals.

However, it should also be noted that with BIA scales with foot-to-foot measurement, body fat is measured on the lower half of the body, because the transmitted current always finds its shortest way through the body.

The scale complements very well with Fitbit fitness trackers, because the data is displayed in the same app. If you like, you can get a comprehensive overview of your weight and daily activities and take countermeasures if necessary.

About the Author: Jay